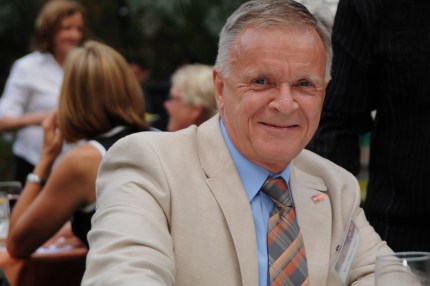 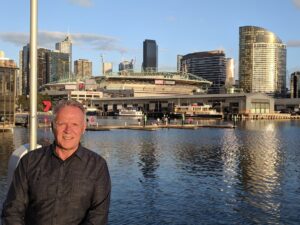 Rev. Canon Albert Ogle was born in Belfast, Northern Ireland where he was ordained a priest in the Anglican Church of Ireland in 1977. He moved to Southern California in 1982 and was received into the Episcopal Diocese of Los Angeles where he served as parish priests in several churches included All Saints, Pasadena and St. George’s, Laguna Hills. While serving at All Saints he founded the AIDS Service Center and implemented a model program of care and prevention that he had developed for the state of California in 1987. He worked closely with ecumenical partners throughout the research and planning process including retired Cardinal Roger Mahoney of Los Angeles Archdiocese. The Center served an eighth of the county  for over 20 years before closing two years ago.

In 1991 Canon Ogle was invited by Anglican Archbishop Yona Okoth to advise the religious community in Uganda how to implement an AIDS prevention program with assistance from USAID and TASO. Church Human Services Uganda (CHUSA) was part of a collaborative venture where the government and major Ugandan institutions succeeded in bringing levels of HIV infection down to under 7%. 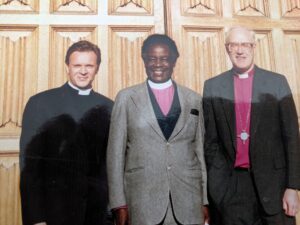 Ogle at Lambeth Palace with Archbishop Okoth and Archbishop of Canterbury, George Carey.

Canon Ogle was recognized both by the State of California and his Diocese for his local and international work when he was made a Canon in 2002 . He continued working in Uganda with Hospice Uganda and brought morphine to Uganda for the first time in 1996 as part of a cancer and HIV palliative care strategy.

Canon Ogle was invited to attend the UN High Level meeting on AIDS in 2011 and spoke at the International AIDS Conference in 2012 on “HIV and Religion”. He has worked closely with Ecumenical Advocacy Alliance in Geneva and has helped to fund several HIV and employment programs in Uganda over the past three years through the work of the St. Paul’s Foundation for International Reconciliation. He was particularly interested in assisting the religious health care system expand its services and resources to the most marginalized and difficult to reach populations, particularly in Africa where 40% of health services are provided by the faith community. 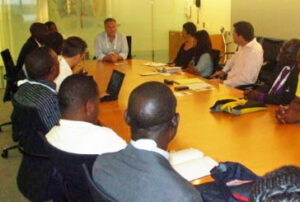 Canon Ogle was educated in Ireland, Wales and London and returned to Trinity College Dublin to complete a M Phil in international Peace Studies. His thesis “Returning to Places of Wounded Memory-the Role of World Heritage in Reconciliation” was published by UNESCO and he has been invited to be an Expert Consultant on the early Christian Sites of Galilee’s submission to the World Heritage list. He has particular interest in developing the historic sites of St Paul in Turkey and Greece as an international World Heritage Site, with reconciliation as their outstanding universal value. Canon Ogle’s reconciliation work has been extensive over the years from Ireland to the USA, Rwanda and Uganda.

Canon Ogle was made Canon of St Paul’s Cathedral in the Diocese of San Diego where he served on the cathedral staff. He worked closely with the LGBTI community on marriage equality issues and was awarded Equality California’s “Pride in Action Award” in 2012 and Local Hero’s Award in 2014 by KCET.

In 2014, Canon Ogle was appointed Vicar of St. Peter’s Lithgow in the Episcopal Diocese of New York where he served for nearly five years. 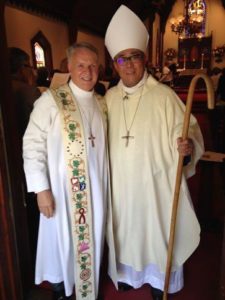 During this time he continued to advocate for the marginalized, both locally and internationally. In 2015, St Paul’s Foundation for International Reconciliation sponsored a women at the United Nations event and several visits to Cuba, where women’s and LGBT rights remain quite progressive in comparison to many of the homophobic and sexist cultures of the Caribbean island communities.  His most successful venture during these years with the people of Dutchess County, included Millbrook at Home (a volunteer support network for seniors). In June 2019, he was appointed Interim Rector of St. Paul’s Chestnut Hill, Philadelphia, famous for its outstanding Anglican music program and vital ministries to the neighboring communities of Mount Airy and Germantown. During the past two years, the parish dealt with transitioning to a new rector with a discernment and search process and adapting to the needs of the community because of the Covid 19 pandemic. A full summary of the shared ministry can be found HERE. Albert will be retiring from full time active ministry in the summer of 2021 and will continue living in the Chestnut Hill area of Philadelphia. 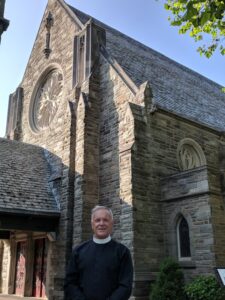 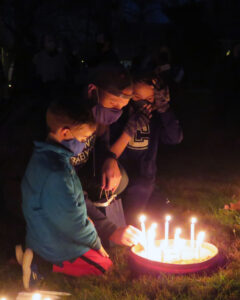 He continues to enjoy photography, painting and travelling.