The conflict between the Israeli and Palestinian communities has reached a new low level these past few weeks as hundreds of civilians are caught in this very militarized war that we are seeing daily in news reports. Presiding Bishop Michael Curry has issued a statement, the Bishop of Jerusalem has issued a statement and the American Friends of the Episcopal Diocese of Jerusalem has released some news of what people are needing on the ground.

We feel pretty powerless to effect any significant political change -hard to believe when $4 billion of our tax dollars go to support Israel and the corrupt regime of Benjamin Netanyahu (who is a graduate of our local Cheltenham High School -what did he learn there one wonders?) So, what about humanitarian relief?

I visited Israel in 2008, during the 60th anniversary of Nakba or “catastrophe” when in 1948, Israeli forces practiced ethnic cleansing and removal of the Palestinian community from villages and regions of the Holy Land. The beginning of the apartheid system between Arabs and Jews began and slowly as the Palestinian community became more and more cut off from each other and new Jewish settlements ate away at whatever limited land they had been allowed to live on. Like holes appearing in swiss cheese, the “two state solution” proposed by advocates like Jimmy Carter, has become less and less likely as the imagined Palestinian state is eroded. The comparison of what these settlements have done in 60 years, makes the two-state solution to a long-term peace process, pretty impossible. Check out this image of shrinking Palestine. Democracy is also shrinking in this region while emerging theocracy and totalitarianism plays with the future of this violent topography. 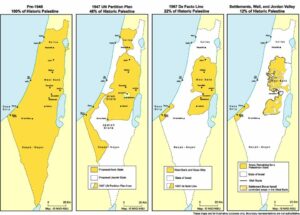 The United States has continued to send money, support, powerful symbolic gestures (like moving the US embassy to Jerusalem under a Trump Administration’s sop to theocratic American evangelicals and orthodox Jewish community) who want to see Jerusalem (and perhaps the Temple) restored as the capital of Israel. The eastern part of the city is strongly Arab and the incursions into the West Bank, the expansion of settlements and displacement of Palestinian Arabs (and Christians) by the current regime, underscored the escalating frustration with the political oppression. The invasion of the Al Aqsa Mosque three weeks ago by an estimated 1,000 Israeli troops, as Muslim worshippers were honoring Ramadan, was the final straw. VIDEO FOOTAGE HERE The State of Israel remains precarious and forming a strong government has been problematic as the country divides more and more on religious grounds.

During my visit to Israel, I went to the West Bank with several other Sabeel Conference attendees but we were not allowed into the territory as shelling was taking place. We all had to hide for cover under a wall as Israeli rockets were being fired into the West Bank and this photo with Irish Nobel Peace Prize Winner Mairead Corrigan McGuire, was taken just before we all had to take cover -a frightening experience. The experience of travelling to the places associated with the life of Jesus was both beautiful and disturbing. I had studied international peace studies at Trinity College, Dublin and my thesis was aspiring UNESCO’s World Heritage Program to use cultural and religious heritage as a vehicle for international reconciliation. UNESCO invited me to present my thesis at their global symposium in Quebec, where the concept attracted a lot of attention and was finally published by UNESCO and the University of Laval.  From this work, I was invited to consult on the Israeli government’s application to UNESCO to classify many of the early sites of Christianity as a World Heritage site with reconciliation as an outstanding universal value. I got to meet many of the creators of this remarkably interesting proposal and the plan was to see if these sites could be used in reconciliation and then built upon this work by focusing over the long term on Jerusalem and attempt to ease the conflicts around her many holy sites, including the Al Aqsa Mosque (site of the temple). Since then, many of the progressive/centrist Jews who were leaders of these early explorations, were sidelined by more orthodox fanatics and the proposal was delayed and not recommended because of reasons not fully disclosed.

After studying the proposal, the main issue that became a stumbling block for me was the fact of these sites had (at least historically traced from the 4th century) been curated by the Palestinian Arab Christian community who had provided access and hospitality to pilgrims for centuries, right up to the present day. The site of the Beatitudes, Nazareth, Capernaum, and many places associated with Jesus could have been recognized as a collective World Heritage Site, but the Israeli government (who would be responsible for the sites once designated) could not agree on protecting the culture and traditions of the Palestinian Christian community who had been forced out of many of their villages and were living in appalling conditions in decreasing available land. Without these guarantees by the Israeli government, within a couple of generations, these living sites of inspiration and hospitality, could end up as simply tourist museums. As Christians who value the contribution these spiritual ancestors have given the world, we need to be in solidarity with them to continue to support the healing work of the church in the very villages and towns Jesus brought the good news.

The combination of seeing the Israeli perspective and the Palestinian perspective has informed my belief that America is on the wrong side of justice and our unquestioned support of the Israeli regime needs complete overhaul. Antony Blinken, as US Secretary of State is trying to move a diplomatic solution forward with Egypt and other Arab nations taking a significant lead in brokering peace negotiations between Hamas, the Palestinian Authority and Israel. In the meantime, we should not only be holding our government accountable for what we are supporting and provide emergency relief to hospitals there that are trying to be the presence of Jesus in the contemporary world he came to save from itself.

Please join me and other Episcopalians in supporting the appeal from the American Friends of the Episcopal Diocese of Jerusalem by donating for humanitarian and medical relief online HERE.

Jesus once wept over Jerusalem where he met his own tragic death. Supporting our fellow Christians who are under siege and trying to provide health and emergency support seems the right thing for us to be doing right now. Working for long term peace and stability and creating an appropriate American and international response is another.

Albert Ogle was born in Belfast, N. Ireland and studied theology, education and art in the UK and the Republic of Ireland. He was ordained in the Anglican Church of Ireland where he served in two parishes and got heavily involved in the reconciliation movement. Exiled in 1980 for being in a gay relationship, he eventually moved to Los Angeles where he began ministry with high risk street youth through he Los Angeles Gay and Lesbian Center. During this time, he became very active in AIDS related ministry and designed the first AIDS plans for Los Angeles and California in the mid 1980's. The AIDS Service Center in Pasadena was the model envisioned and it served an eighth of LA county for over 25 years. Ogle became one of the first openly gay clergy in the Episcopal church and served in parishes in LA, Orange County, San Diego, new York and Philadelphia, where he now lives with his husband. He returned to Trinity College Dublin to complete a masters degree in international Peace Studies where a thesis on World Heritage Sites and reconciliation was later published (Returning to Places of Wounded Memory). He consulted for UNESCO's World Heritage Program and became interested in the sites associated with St Paul, founding the St. Paul's Reconciliation program that ended up working with the World Bank and US State Department on LGBT economic and human rights issues. He worked in several African and Caribbean countries where homosexuality is criminalized and the church remains one of the most critical forces of oppression. Ogle was made an honorary Canon of Los Angeles in 2002 for his international work and later in the Diocese of San Diego. He enjoys writing, travelling and painting and retired from active ministry in August 2021. View all posts by Albert J. Ogle